The business was originally established in 1957 by the late Kenneth H Frizzell (pictured centre back row) who ran it as K H Frizzell, Reg’d Surveyor until his passing in 1992...

His son Hamish then took over the business, changing the name to Frizzell and Associates, and in 2005 merged with another company and rebranded to Survus Consultants to better reflect the corporate structure and varied professional disciplines that were within the business by that time.

The "what we do" isn’t as important as "how we do it". It’s the people who you deal with that make the difference – and we can say without exception, everyone here is fully house trained and a delight to talk to. 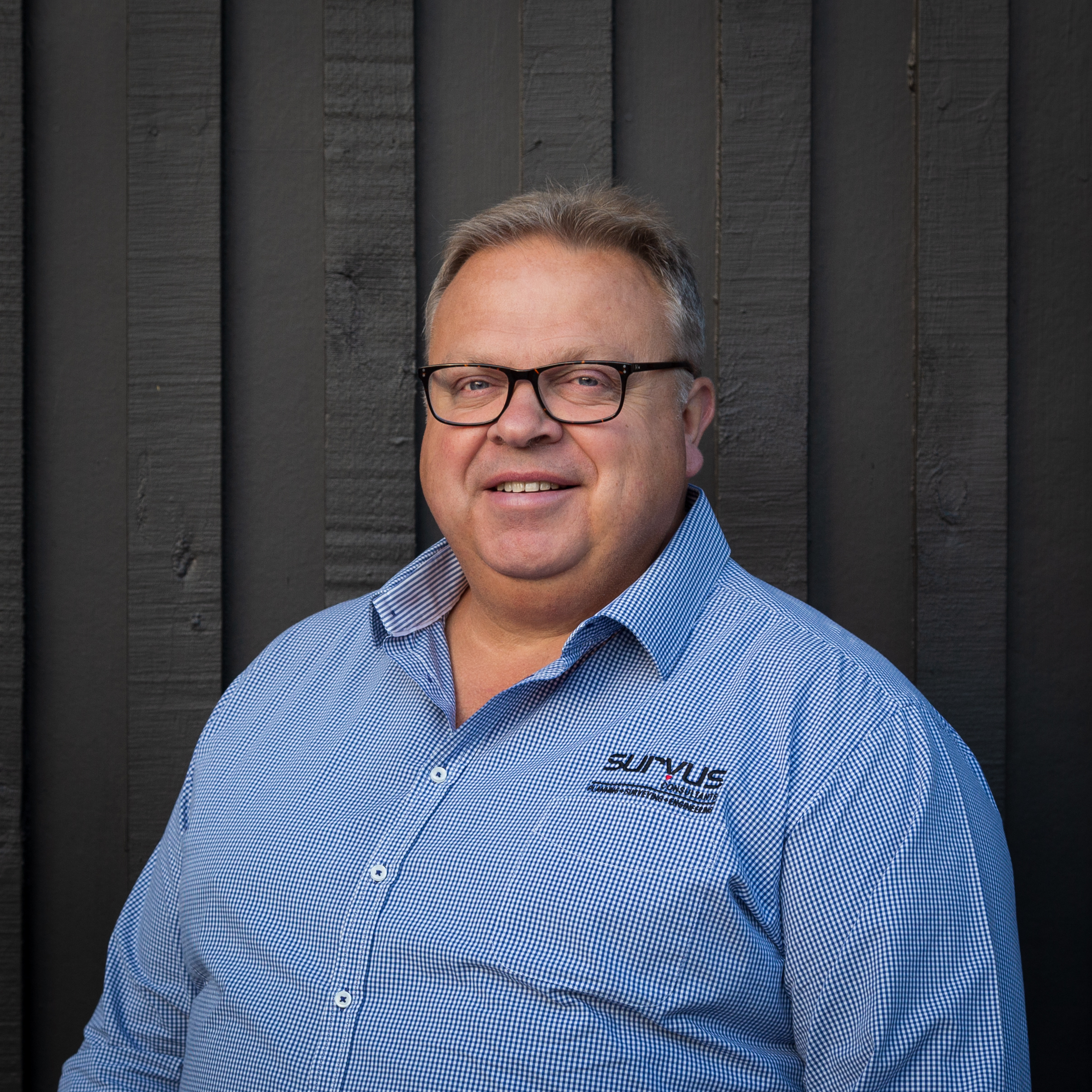 Top dog Hamish explained that despite being the founder’s son, he still had to work his way up the company hierarchy like everyone else to get where he is today. He started as tea boy, then office junior. After lunch, he was appointed to the board. He’s well red in the wine department and doesn’t spend the weekend cleaning the car (you may notice that about him when he calls).

Position in the crew: Director of first impressions. Hamish is the one who’ll talk you through the stuff you need to know and will help you to think outside the square if required, to address issues in ways you may not have thought of.

Likes: Blacksheepdesign
Dislikes: Cats with too much attitude 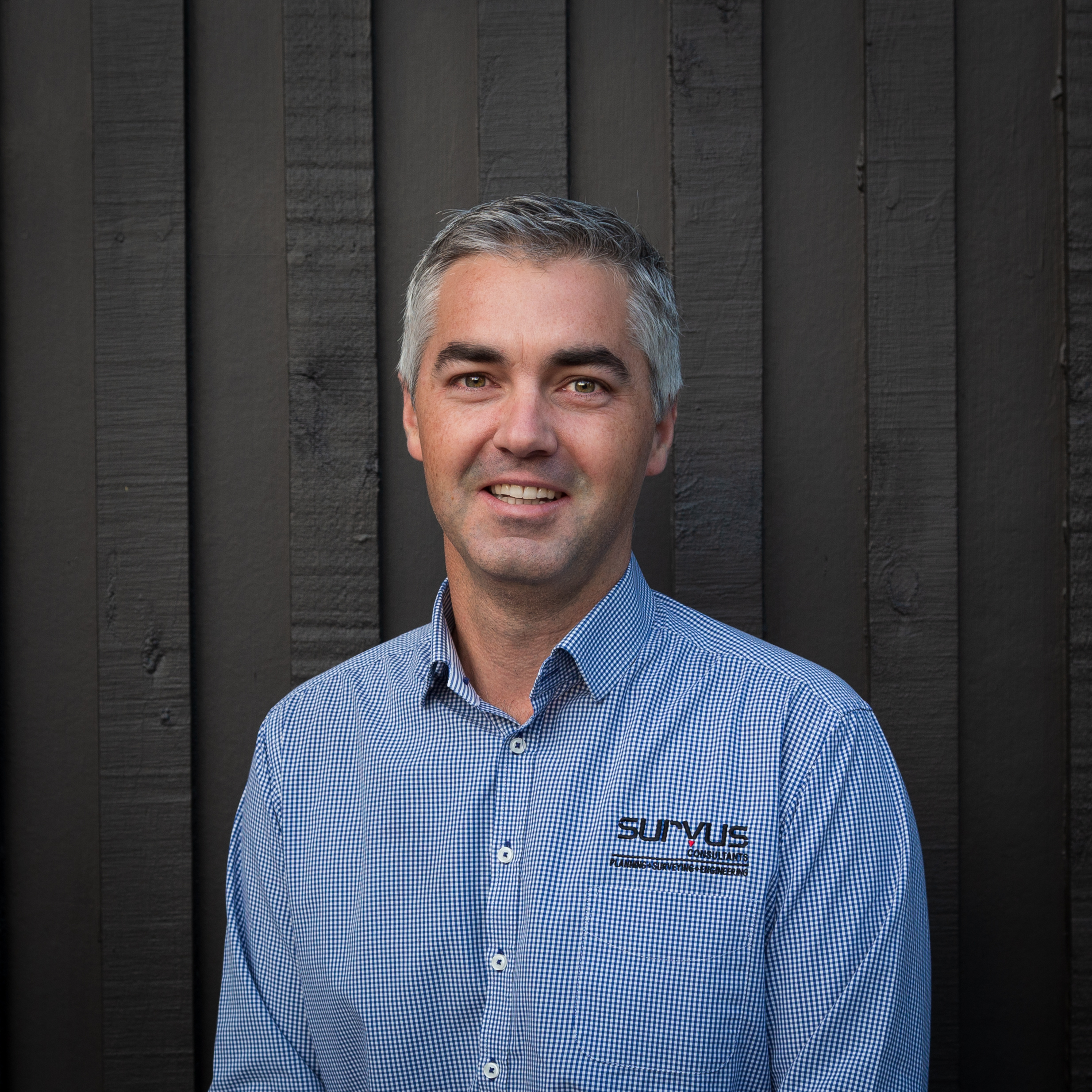 Brewmaster Craig is partial to hockey and hops, being a very competitive sportsman and homebrewer. He’s described as generous, kind and personable (maybe not on the hockey field though).

Position in the crew: We see him as being in our number 2 key position when he steps in for Hamish. Craig is immensely skilful and a font of knowledge for the rest of the team here, So we reward him by sending him to council meetings. Craig is also on the executive committee of the Canterbury Branch of the NZIS. 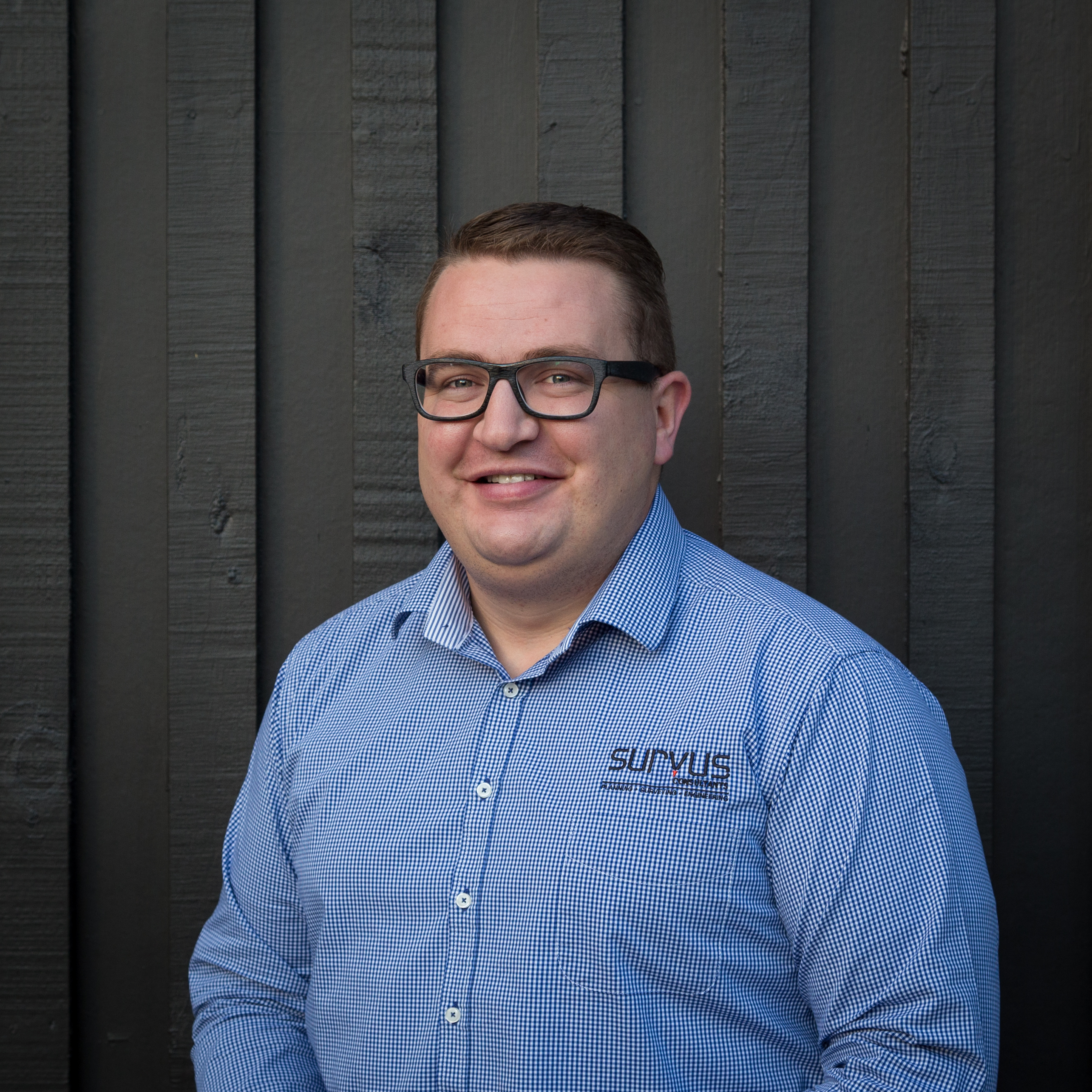 Poor Reuben says he’s not sure he has any friends. But he’s always talking about his mates Glen Fiddich, Ben Nevis, Glen Morangie, Johnnie Walker and Rose Bank. He watches so much sport that he can name virtually any sportsperson from any sport in any country. He’s also renowned as a repository of totally useless information.

Position in the crew: Joining the team in 2011, Reuben has worked his way up the ranks to hold the position of Practice Manager. Aside from this, Reuben is the minister in charge of small job quotes, number crunching and accounts. This is in addition to his self-appointed position as the chief advisor to the boss. 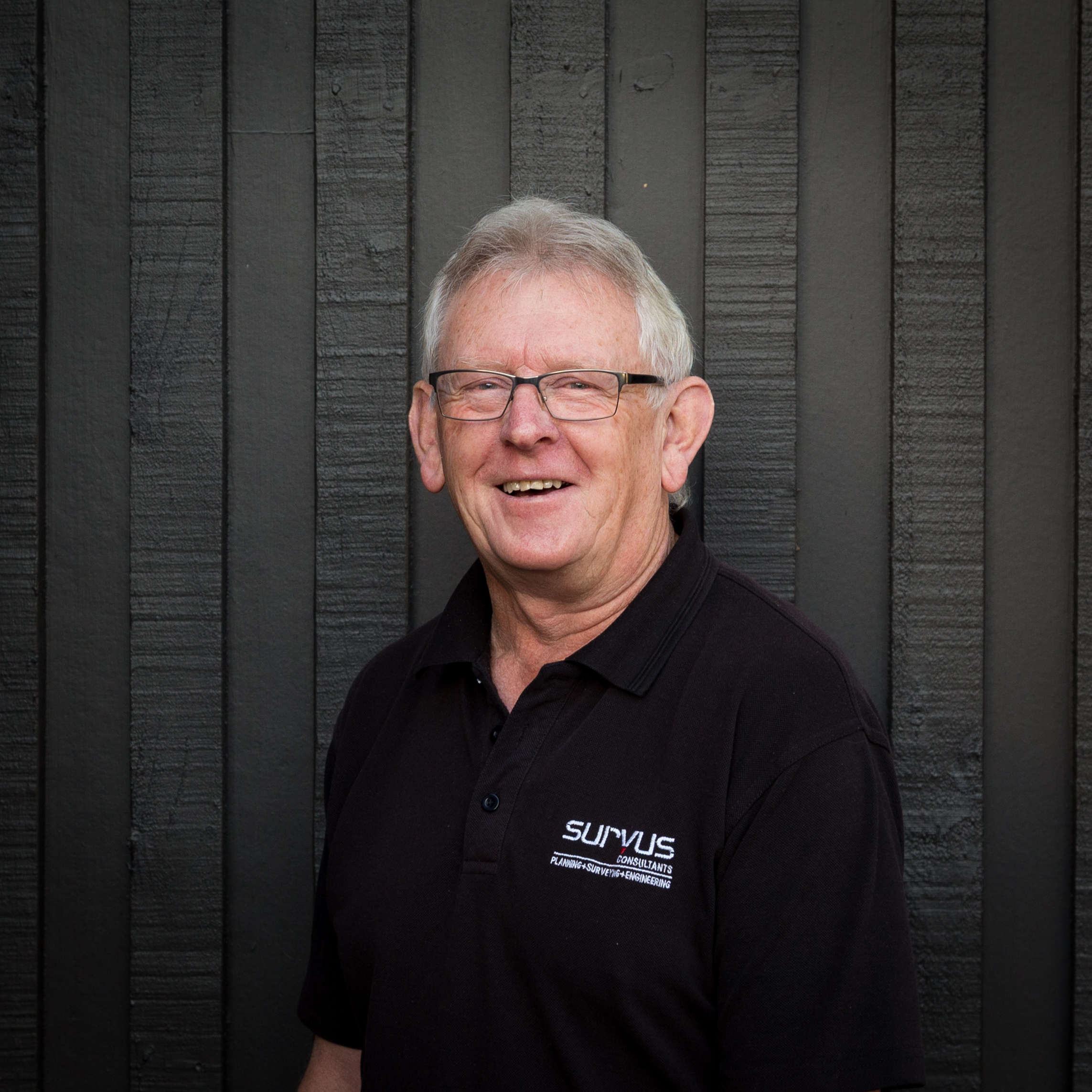 His official title is Civil Engineer, which fits him perfectly as one of the most civil people we know. He likes birds and Guinness. By that, we mean he likes nothing better than sitting outside on his patio, listening to the birds, and enjoying a pint (473.176ml) of the Black Stuff.

Position in the crew:
Jim’s part time job is office agony aunt. The rest of the day he’s in charge of engineering design and plan drawing. He also manages projects and supervises contracts. He’s wise beyond his years. And there is a few of them! 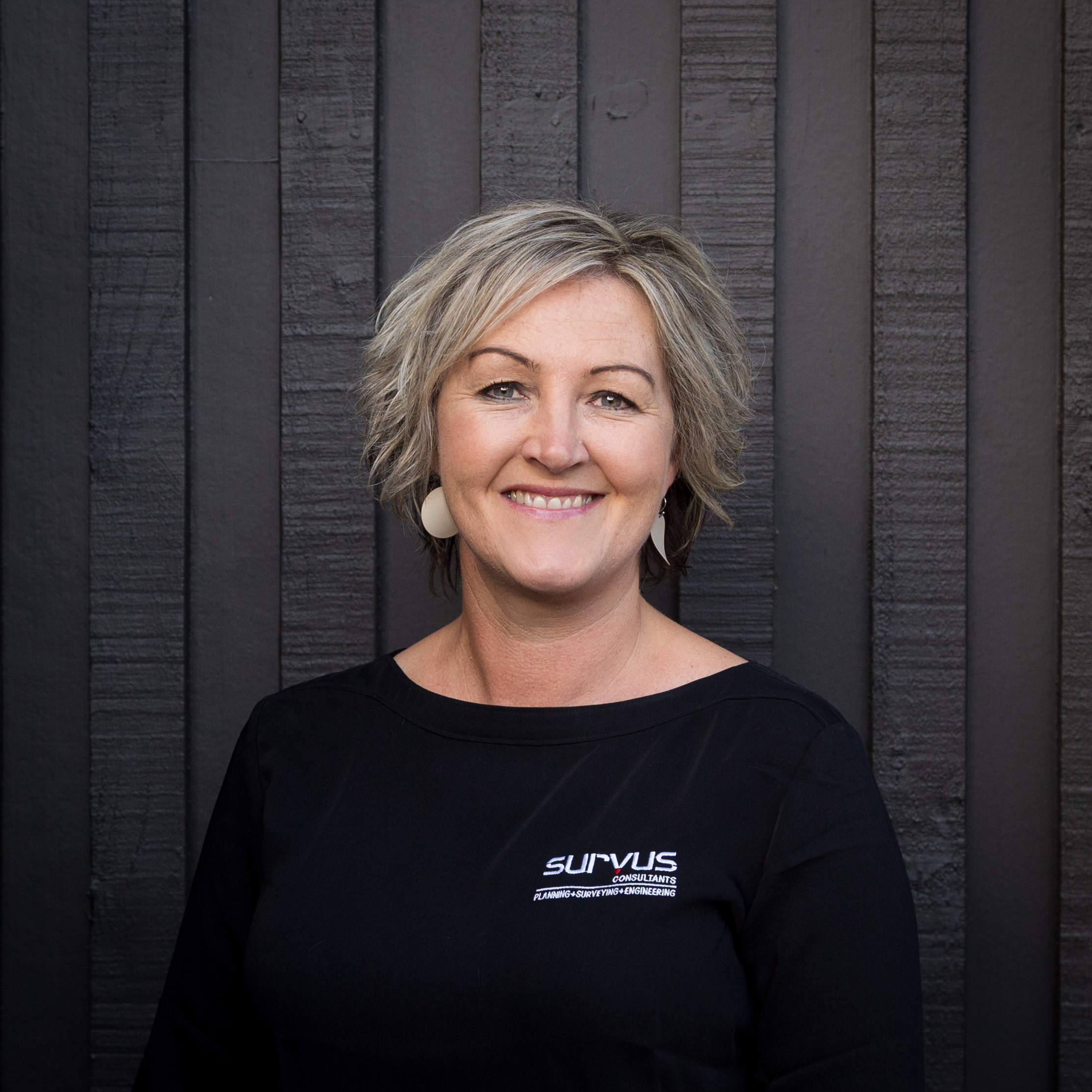 Horses or fancy houses – if Kirstie wasn’t working for us, her dream job would have to involve one of those two things. Which all adds up really, as this outgoing UK-expat used to work in real estate, and is still happiest when she can hop back in the saddle. Kirstie’s happy, easy-going personality has made her a hit with our clients (and with our team).

Position in the crew: When ‘relationships’ is in your job title, you’ve got to be a people person. Kirstie is all about putting her listening ears on (as she tells her kids) and making sure that Survus clients get the best possible service. She also specialises in managing basketball teams, so we might have to put Andrew’s height to use with an office team.

Likes: Good feedback, riding horses and long walks on the beach with her dogs.

Dislikes: Tailgating drivers and when her kids don’t listen. 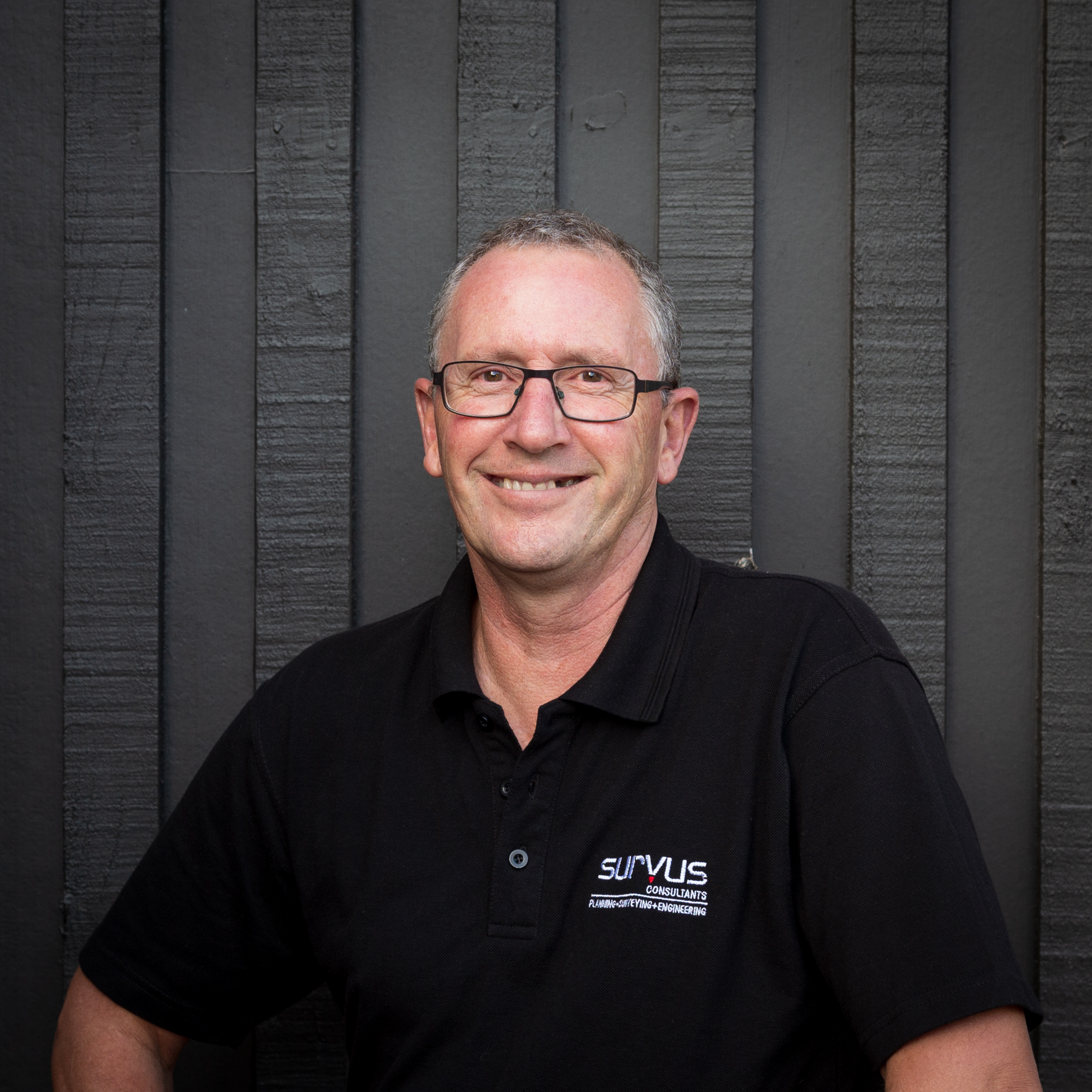 ‘A complete waste of time and space’ is how Shane says his friends would describe him. We’d like to agree, but that wouldn’t be very PC of us. So, we’ll just say Shane is a truly nice guy and quite literally a computer magician (every time he’s seen near one, it disappears). He joined Survus last century after a lifetime at Lands and Survey as a public servant.

Position in the crew: We allow Shane out to conduct site surveys as the fresh air does him good. Then he will draw them. He told us he loves working with wood, so in the office, we gave him a desk for use in drafting plans. 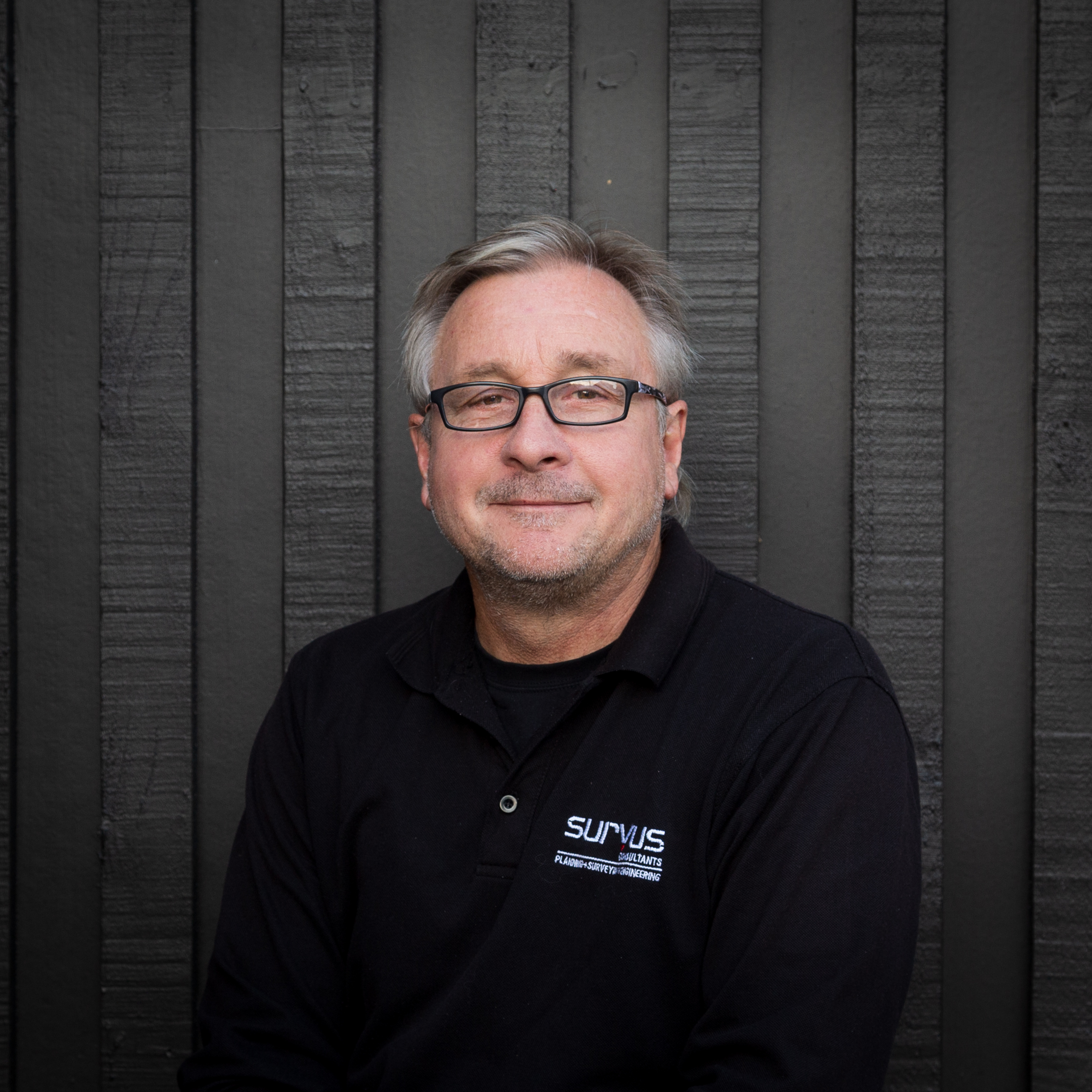 David’s ideal job would be Apple CEO, mainly due to the $378m salary. However, he’d retire after a week. He’s been with us since 2002 and we’re pretty sure it’s nothing to do with the salary here. When he’s not sleeping, socialising or travelling overseas, David referees and coaches rugby. He’s nice like that.

Position in the crew: Officially, David is a Licensed Cadastral Surveyor. We’ve found that cadastral surveying suits David to a tee as he’s super organised and loves being outside. So we mostly send him well out of town to do our country stuff. 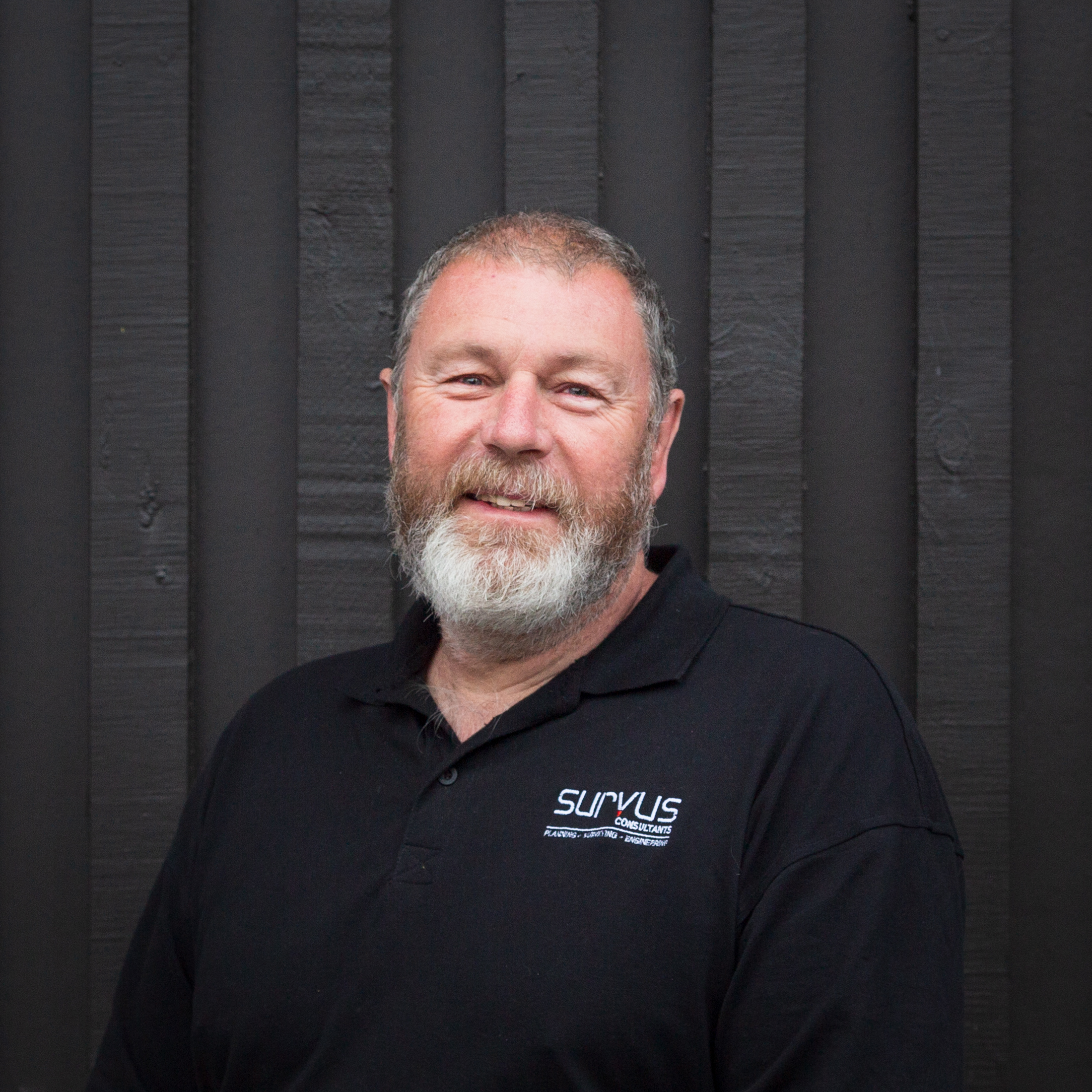 Geoff used to bring home the, er, bacon as a lab technician in the food industry before doing his big OE in ‘94. Geoff describes himself as both happy and honest. After five or six rums, he’s happily honest enough to admit that Phil is his greatest annoyance. Geoff’s a Canterbury man by birth and after a short lapse (around 33 years) of living in Northland, he returned to his roots and joined us in 2006 as a ten-year veteran of surveying.

Position in the crew: If it’s to do with land surveying, Geoff’s our man. “Big horse” as he’s affectionately known is our set out meister, especially for our small builder clients. (That’s smaller in terms of company size, not builder height). He works very closely with Phil, which seems to be both a blessing and a curse for him. *Sadly Phil left the company.

Likes: The friendly atmosphere at Survus.
Dislikes: Just about everything, especially Phil 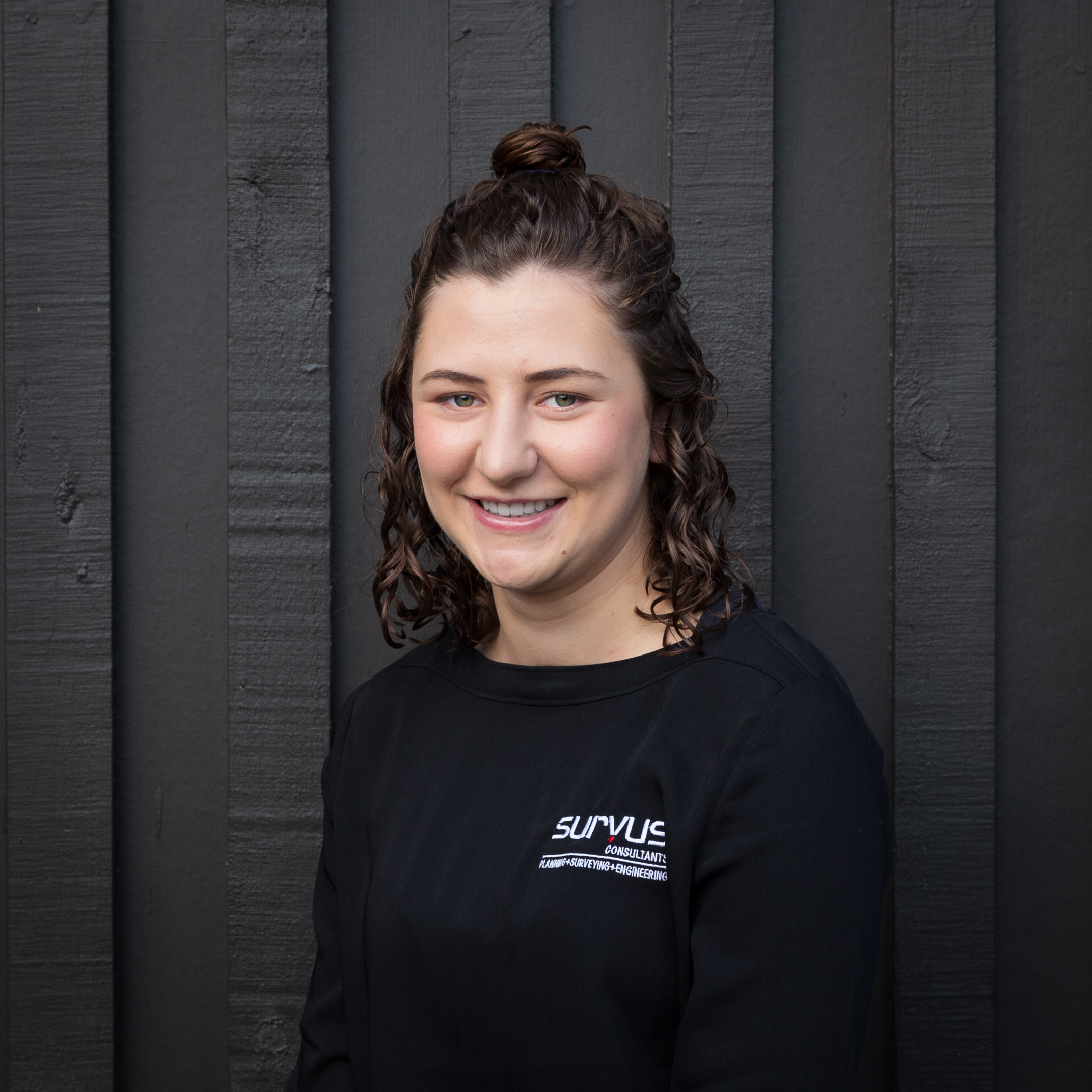 Amber-Rose has a secret identity – at work she’s Amber-Rose, Executive Assistant, but at home? She’s just Amber (there’s only one of her there, so she doesn’t have to use the middle name). We can’t wait to see what name she uses when she goes on to win The Block (one day), or opens her dream homeware store.

Position in the crew: Official right hand – Amber-Rose makes sure that everything stays under control for the rest of the management team. She’s also the first to help out when little jobs pop up, which makes her extra popular. Outside of the office Amber-Rose is keen on R&R, but at work it’s all about being O&O – ‘organised and orderly’.

Likes: Food, family, and summer picnics that combine the two. 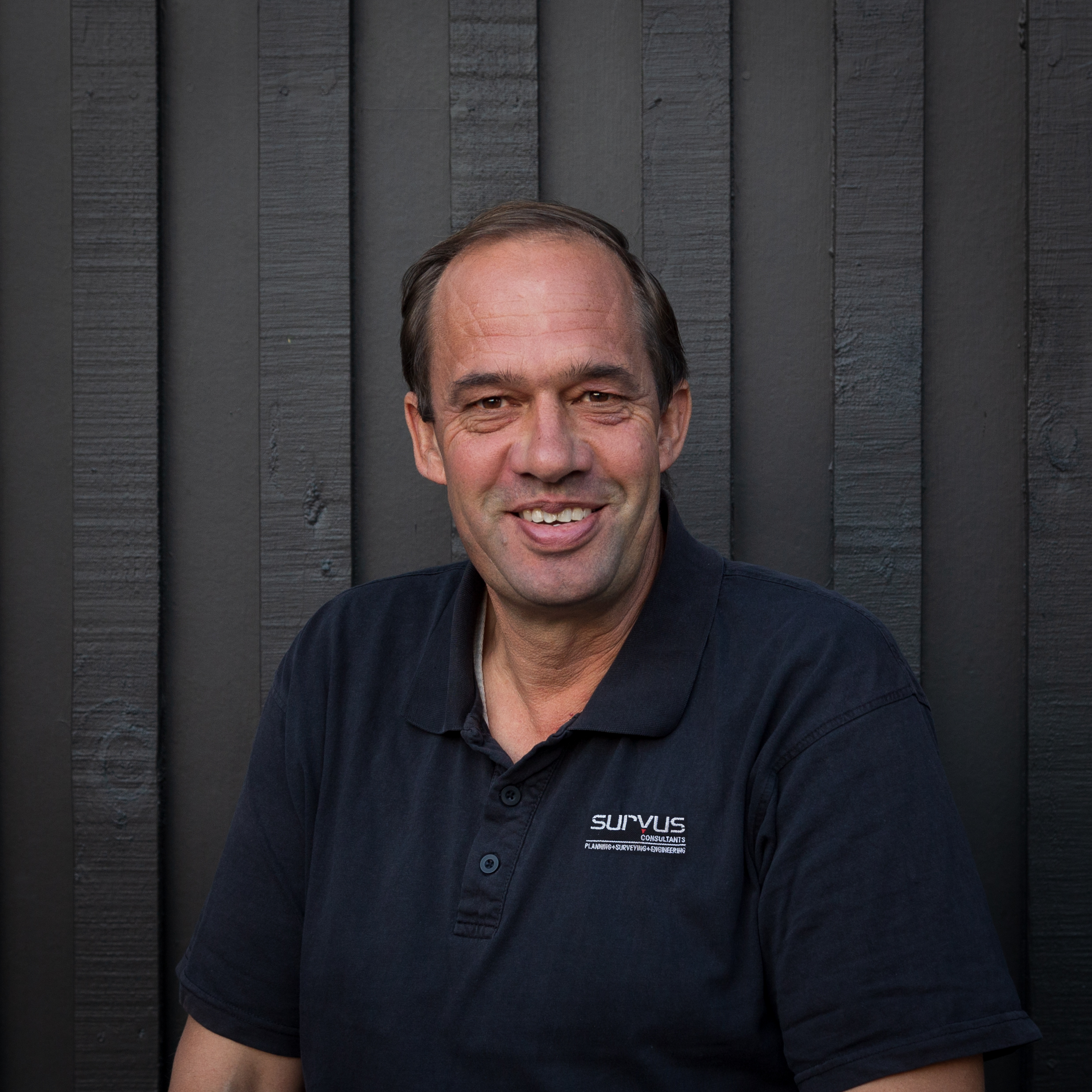 Gorgeous Malc (from his self-appraisal form by his wife) is a Survey Technician. He likes field surveying, is happiest when he has plenty of survey work ahead of him, and his dream job is being a survey technician at Survus. His fear in life is running out of survey jobs to do. In fact, our questionnaire was the only type of survey he doesn’t warm to.

Position in the crew: Early bird. If the old adage were true, Malcolm would have worms. He rises at 3:30am and is often working by 5:30. He’s our prodigal son, having worked for the company for 13 years, before he had a break spent selling survey equipment and drinking scotch whisky. He had enough of salesmanship in 2013 when he returned to Survus, but his relationship with whisky is still going strong. Described as stubborn and always up for a challenge, Malcolm once spent four days working in a stream, in winter, up to his ‘middle’, on one of our jobs. Now that’s dedication. 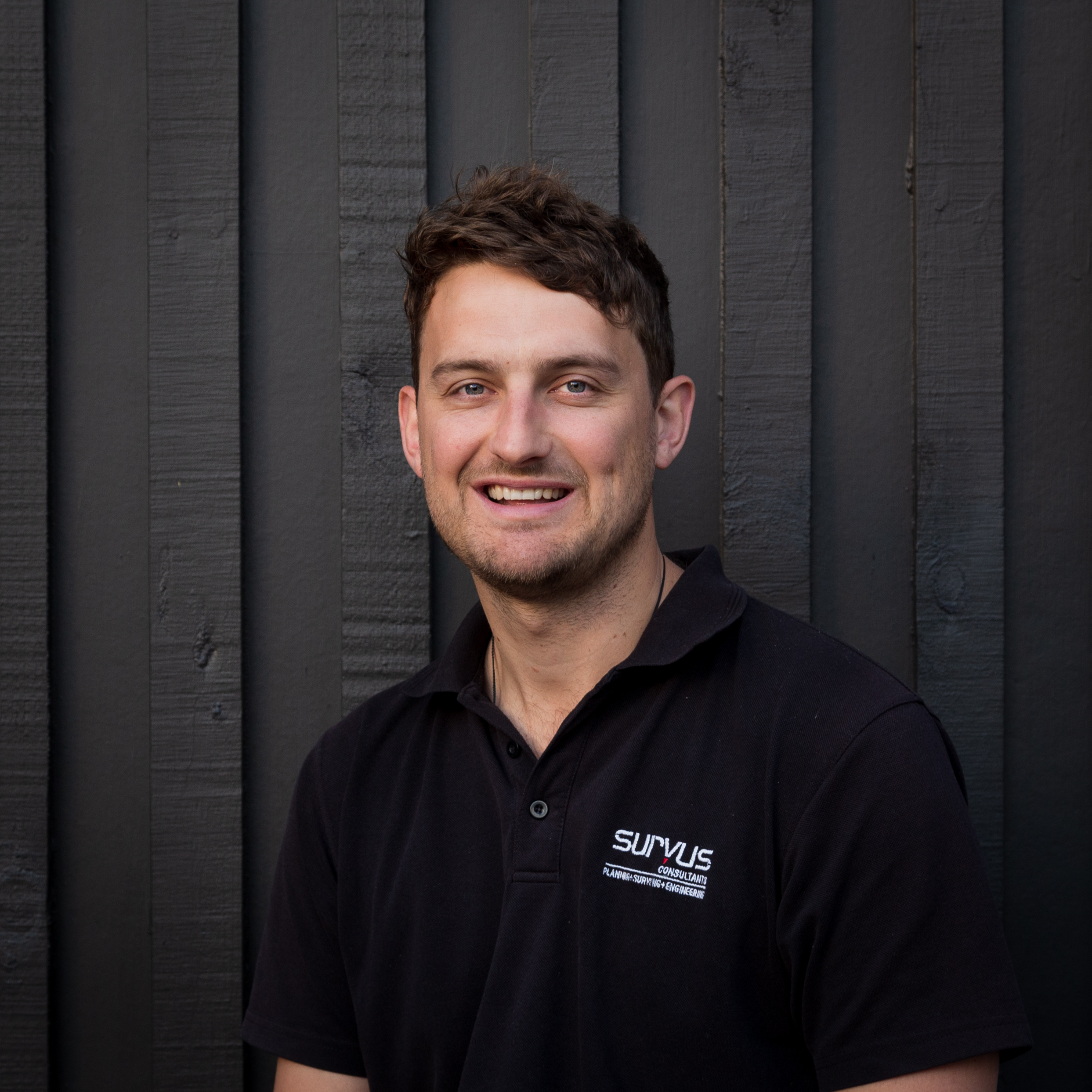 He’s the only Survus member whose name is a rhyming couplet, if you mispronounce his last name a bit. Dan admits he should be a professional sportsman – golf, surfing, rugby or cricket, it doesn’t matter. Instead he chose to be a surveyor, which at Survus is a much more rewarding career – our words, not his.

Position in the crew
Dan is our resident searcher. He finds old survey marks and hopes that there is no earthquake movement, especially while he’s searching presumably. We’re developing Dan’s skills and building on his mining experience (surveying them, that is).

Likes: The outdoors. All of it.
Dislikes: Setting the TV volume to an odd number. 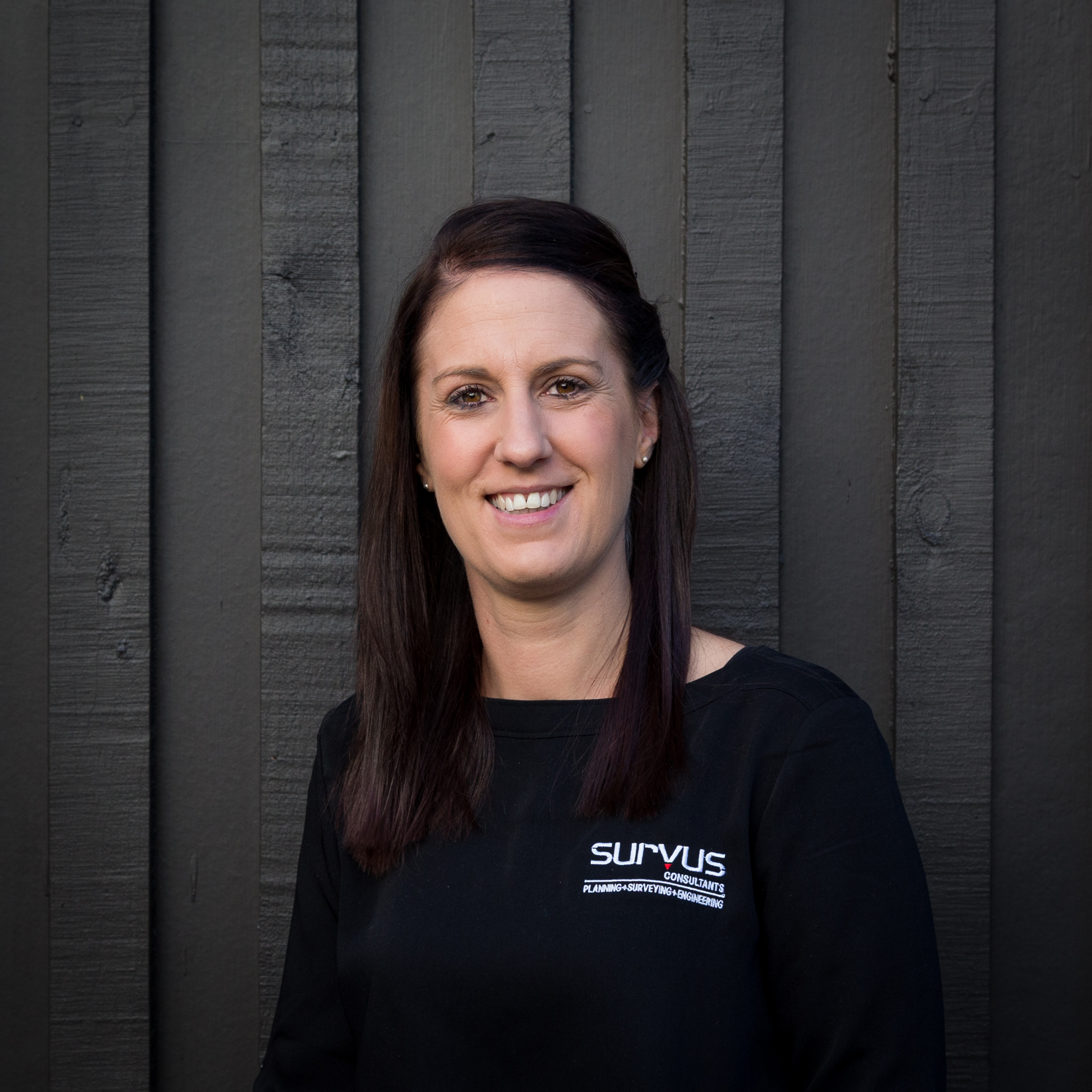 ‘Loud’, ‘obnoxious and ‘opinionated’ are words you’d never use for Jistarne. ‘Reliable’, ‘friendly’, ‘honest’, ‘fun’ and ‘outgoing’ fit perfectly, which is why she’s our social coordinator. Social coordination is something that she’s good at outside of the office too as long as it doesn’t interfere with her shopping.

Position in the crew: When there are no social events to organise, Jistarne quietly prepares land transfer survey plans or talks to councils and clients and their solicitors. She was one of the first in NZ to prepare eSurvey plans. 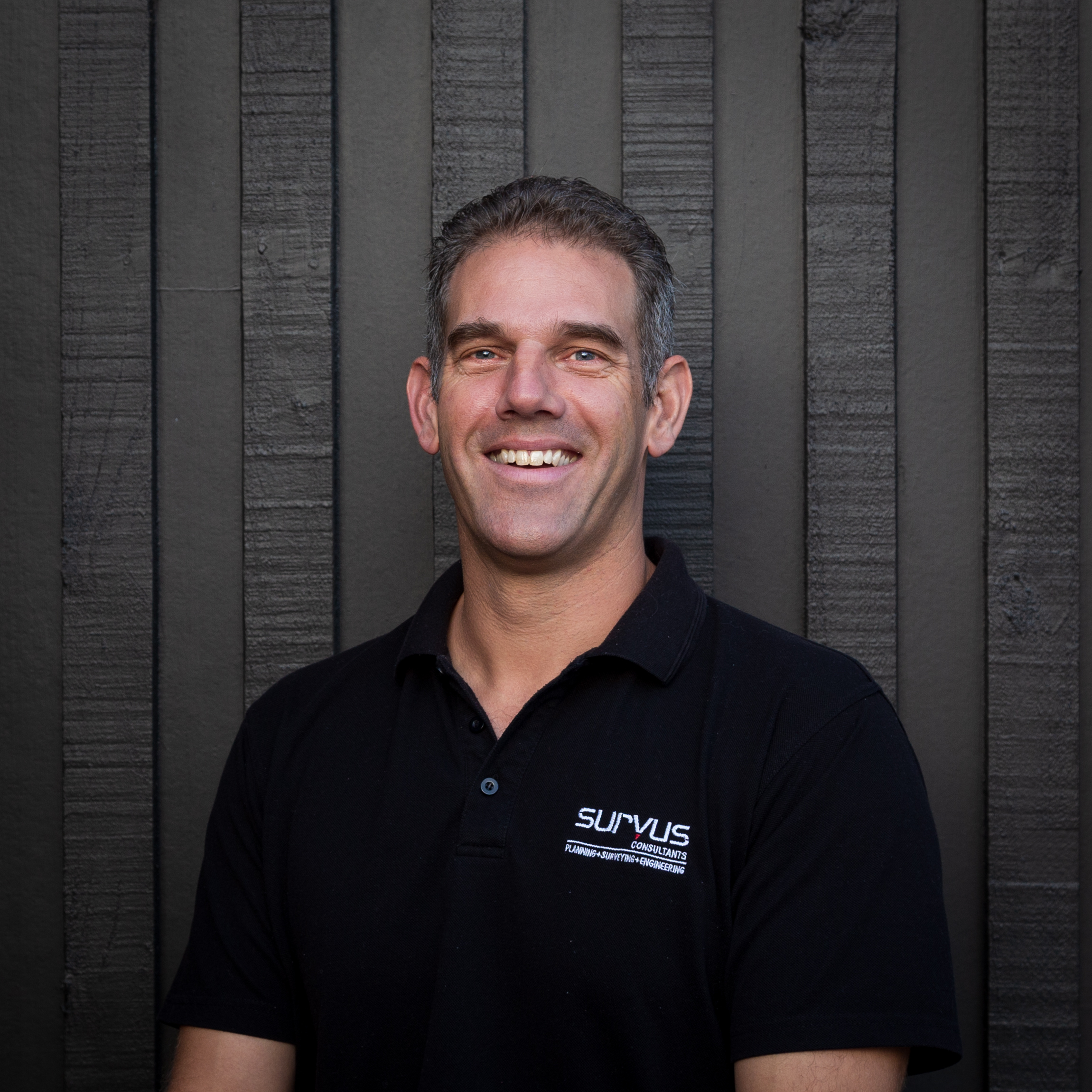 There is no one higher in the company than Andrew. Mainly because he’s a whopping 6’9” (that’s 2.0574 metres, but who actually uses metric measurements for people’s height?). Not surprisingly you’ll find him slam dunking. Mainly decent boutique beer, but also the odd basketball. We asked him what 5 words his friends would use to describe him. ‘Funny’ appeared twice. He is funny, but twice as funny? You be the judge.

Position in the crew: Anyone who is let loose on developing aircraft management systems must be pretty sharp. Andrew is proof of that as our truly excellent project manager, you will see ultra-organisation, efficiency, effectiveness and delivered promises. We see his workspace, but we take comfort in the old saying, “Behind every great man, there’s a messy desk’. 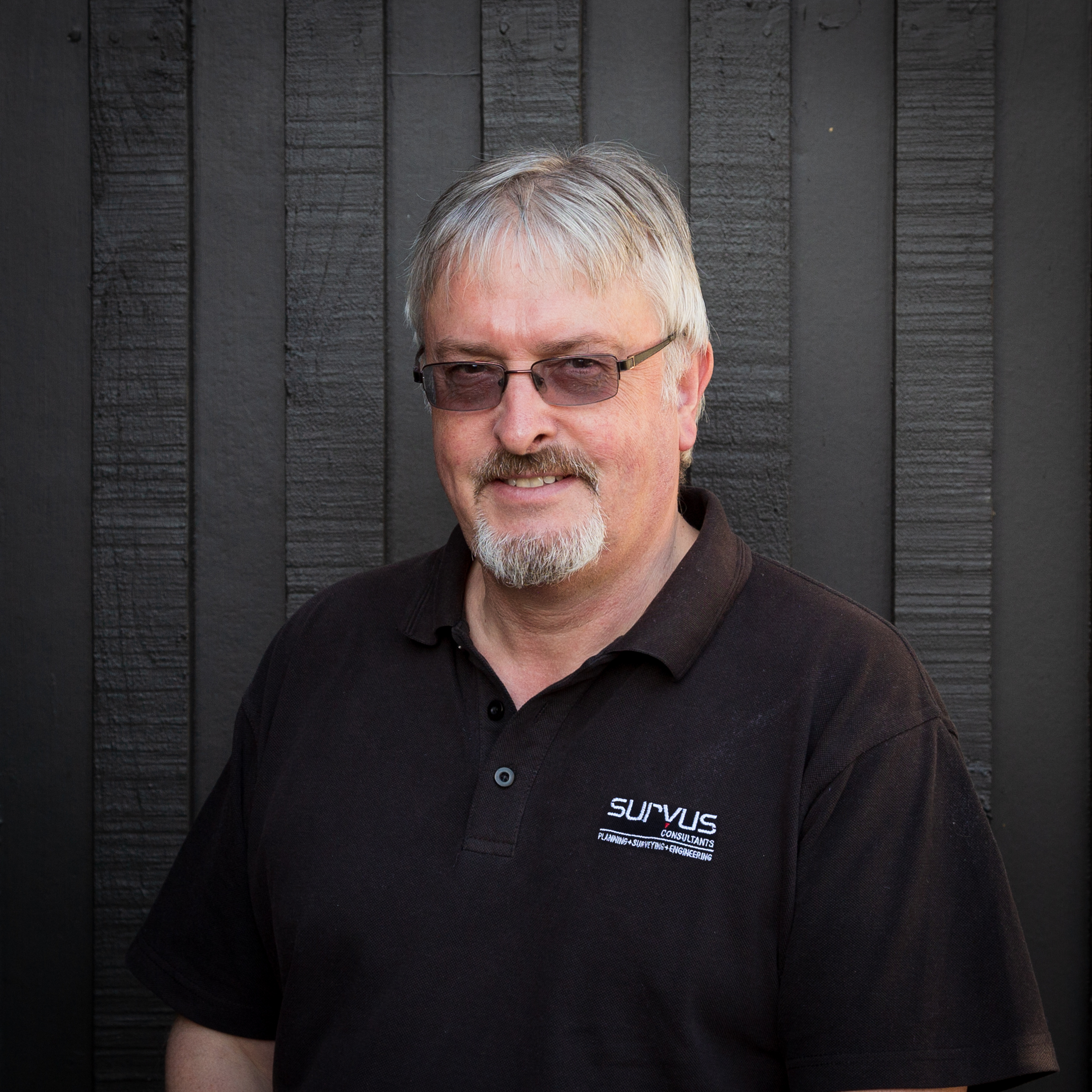 Carl is a stickler for quality. It starts with T.V. He’d be Head of Programming at TVNZ if he could do any job in the world. He’d start by replacing some of the rubbish that’s currently on with a good variety for people to choose from. After that, he’d be chief food taster for a Michelin star chef (doesn't matter who). A man of good taste and an eye for quality – that’s why he’s been at Survus since 2005. 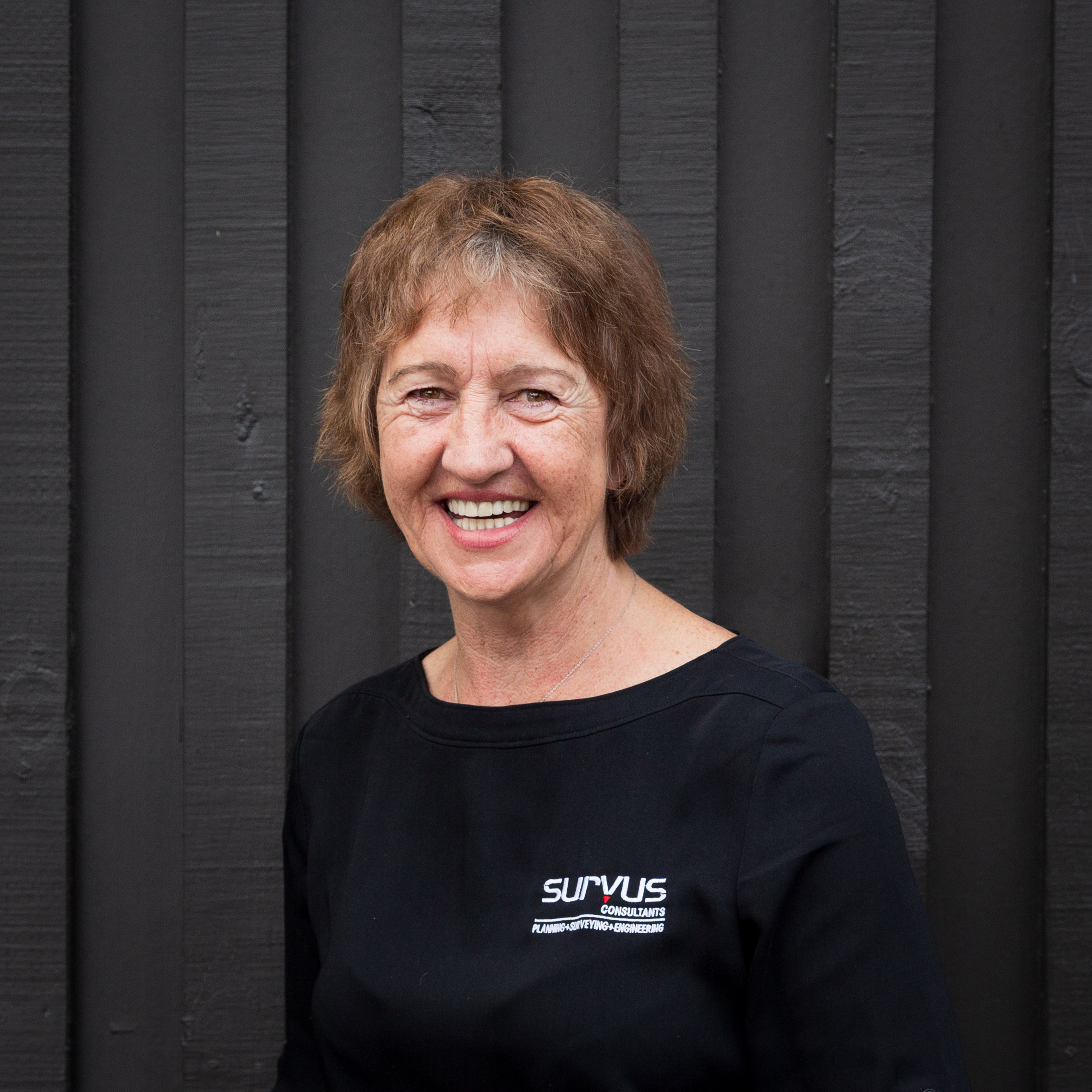 Lynly has the most consecutive double letters in her job title as our Bookkeeper. She also has the fewest vowels in her name. Friends would describe her as friendly, trustworthy and honest. That’s true until she hits the pool table, which is where the shark in her emerges.

Position in the crew: Lynly is extremely popular with all the staff and not only because she’s the one that pays them. She loves working with people and it shows in the way she interacts with everyone here and our customers and suppliers. 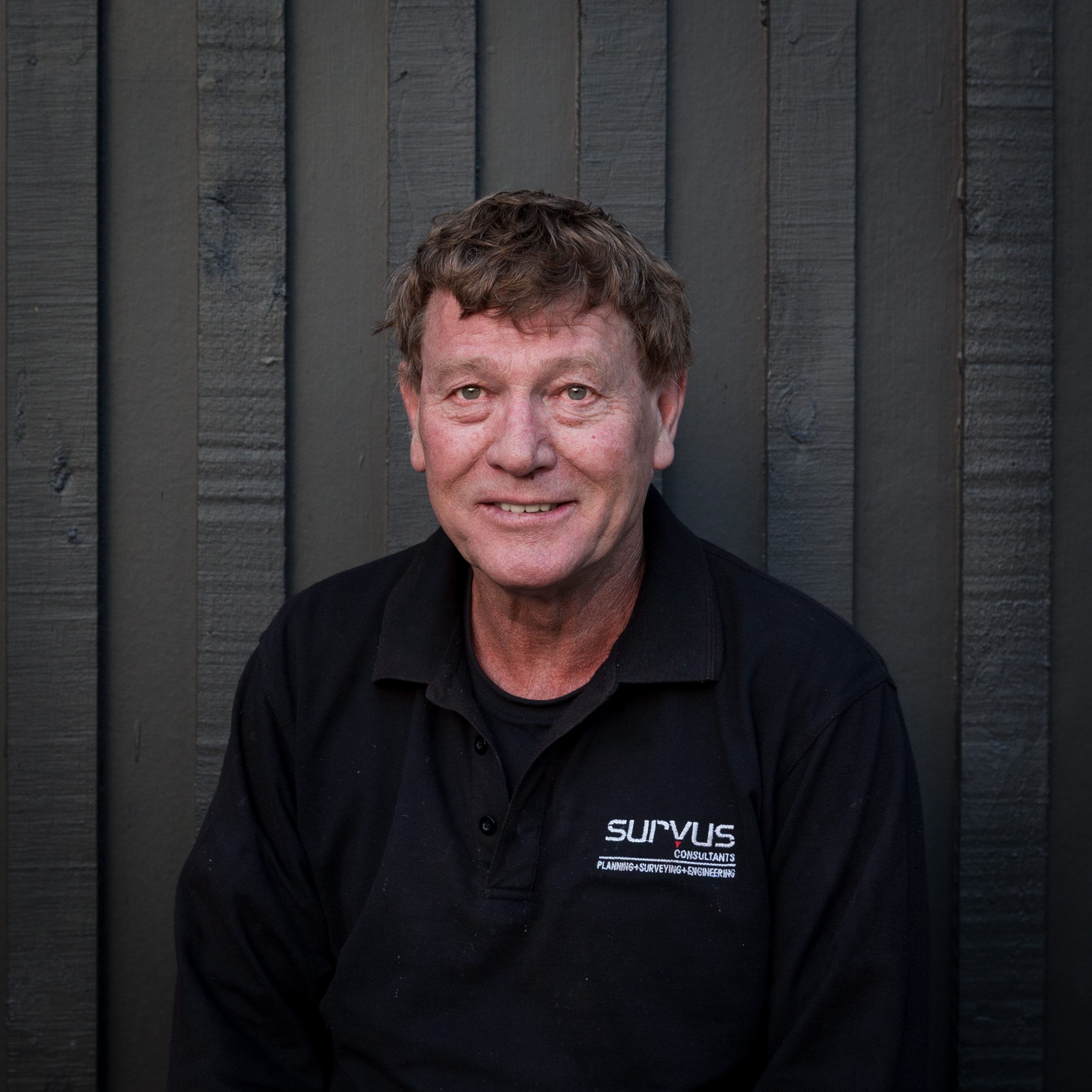 Pete is “as fit as a buck rat” according to Hamish. And he’s better looking too. Pete is a huge outdoor fan and spends a lot of time tramping and sea kayaking. Given the chance though, Pete would have been a helicopter pilot. Fortunately, he never got the chance.

Position in the crew: Pete describes himself as a chainman. Technology has moved on a touch since surveyors measured with chains, which is why we call him a surveyor’s assistant instead. For someone who loves the outdoors so much, we have noticed that he’s a fair-weather surveyor’s assistant. In practice that means Pete is part time (weather dependent).

Likes: Outside. All of it
Dislikes: Surveying in the rain, electric fences and toi toi.

Do you want our passionate, friendly and committed team working on your next project?

Our number one priority will always be to understand your goals and provide a solution to suit your individual needs and requirements.